The original works of art pictured below were created by Norman T. Dahl
and donated to the First Lutheran Church in Glasgow in the early 1960s.​

Normand T. Dahl taught art at Glasgow High School from 1948-1968.  These pictures were from GHS yearbooks. 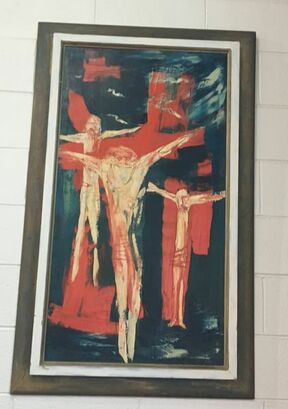 about Norman T. Dahl (1922-1975)
Born in Superior, Wisconsin, Dahl graduated from high school there and continued his education at Wisconsin State University. Receiving his BA and MA, he moved to Glasgow, Montana to begin his teaching career.
There, he taught art and coached basketball and football. Dahl was an air force veteran and was also an active member in the Montana Art Education Association, Montana Institute of the Arts, Glasgow Historical Society, Glasgow American Legion post and the Glasgow Jaycees.
In 1968, Dahl moved to Great Falls to become chair of the art department at Great Falls High. Once in Great Falls, he actively participated in other local and state organizations while continuing to excel in his own artistic endeavors.
Although Dahl taught and supported all mediums, his areas of expertise were printmaking and painting, particularly watercolor.  These works of art have been shown throughout the state.
This painting hangs near the modern stained-glass window. 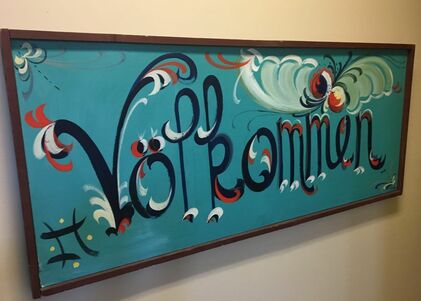 ​
​Velkommen means Welcome in Norwegian...
​This hangs downstairs on the way into the dining room.